Sometimes, I make really bad choices about what I should and shouldn’t do; Building things from scratch, that I know nothing about, is often one of those things. Sure, I generally learn a hell of a lot, gain some new skills and get to experience the triumph of having built an entire bathroom almost exclusively by myself which are some pretty damn awesome rewards. Unfortunately what I never seem to take into account before simply deciding to accomplish enormous projects is that I will spend an awful lot of time staring menacingly at something that has not only just wasted my time and energy but that I could have easily paid someone else to deal with in a manner that takes up less time, energy and sanity.

That basically means that I could have spent a lot more time sleeping instead of doing this. 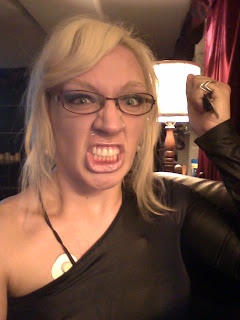 Anyways, moving along.
In the past I’ve spent  wasted a lot of my time on things that didn’t matter and that I didn’t learn anything from. Which in retrospect makes me feel like an amazing fuck up and a spectacular failure because I absolutely should have know better than do such things as renew my World of Warcraft subscription (because I totally wasn’t going to waste all my time playing video games, I had grown as a person!) or to date someone I hated. However, those choices were mine to make and although they weren’t good ones and I didn’t even learn anything from them they made me who I am today; A person who still makes decisions without thinking them through someti- Crap!

Well okay. So I might still make mistakes with the same false logic but I would like to think that I’m maturing and making worthwhile mistakes these days.  So maybe my choice to code a website, build a business, or rebuild a house wasn’t that well thought out but at least I enjoyed (most) of the time spent on the project and as a bonus I gained a lot of really useful knowledge out of it. Such as the fact that regular drills are not the appropriate tool for drilling concrete.

At the end of the day, if I’ve accomplished one thing and learned something new and potentially useful I’m happy with that and it feels like a successful day.  Sure, I’m probably not going to discover something new and incredibly exciting for anyone but me and I might not even learn anything that will ever be useful again and that’s okay. Want to know why? It’s because the caliber of the decisions I’m making has drastically changed which means I’m learning and I’m growing on a fundamental level as a result of it. And that my friends, is something that I’m very proud of.